Have you ever heard a power ballad about peanuts?

If not, no time like the present! If you have – share it with us! We’re proud to introduce you to the video clip for ‘We’re Simply Nuts (For Aussie Peanuts)’. In this clip, hard-working Aussie peanut farmers (who supply delicious peanuts to Simply Nuts) take centre stage, sharing their singing talents (previously reserved for the shower!) with the nation.

So, without further ado, it’s time to blast this simply nutty song as loud as you can and raise your jar of Simply Nuts peanut butter to support Aussie farmers.

Meet some of the Aussie peanut farmers and their families who generously gave up their time to star in our simply nutty music video. They’ve faced many trying times and some very challenging growing conditions, but one thing is for sure – they’re simply nuts for Aussie peanuts!

Mark is a 3rd generation peanut farmer hailing from Coalstoun Lakes in sunny Queensland and has been growing peanuts his whole life. Mark dusted off his vocal cords and put simply, he stole the show with his husky vocals! Mark’s son, Cam, and partner Michelle also starred in our music video. The duo came out of their shells during the filming of our simply nutty power ballad and proudly showed their passion for peanuts with the nation. Last, but certainly not least, we have Ben & Steph, 3rd generation peanut growers, who still grow peanuts alongside Ben’s dad Darrin. They brought their young kids along on the day who are eager to follow in their parents’ peanut farming (and rock star!) footsteps.

Go behind the nutty scenes

Come behind the scenes on the filming of the We’re Simply Nuts (For Aussie Peanuts) music video. Get to know our hard-working Aussie peanut farmers and find out why they put their Akubras in the ring to feature in our simply nutty power ballad!

Can’t get our Simply Nutty power ballad out of your head? We don’t blame you, it’s simply the best! Hit play and learn the words to the nuttiest song of the year and show Australia you’re nuts about Aussie peanuts! #RockOn 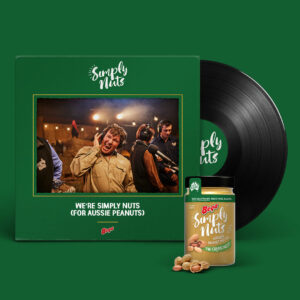